What to Do If You’re at Fault for the Accident

It is not always easy to determine fault for an auto accident. Fault is a complex legal matter that is not always entirely on one driver’s side. Many accidents involve shared liability among multiple parties. Even if you are somewhat certain you caused a car accident in Nebraska, do not admit fault. Do not accept full liability for the crash until an investigation proves you are to blame. Protect yourself by hiring an injury lawyer to determine fault for you. 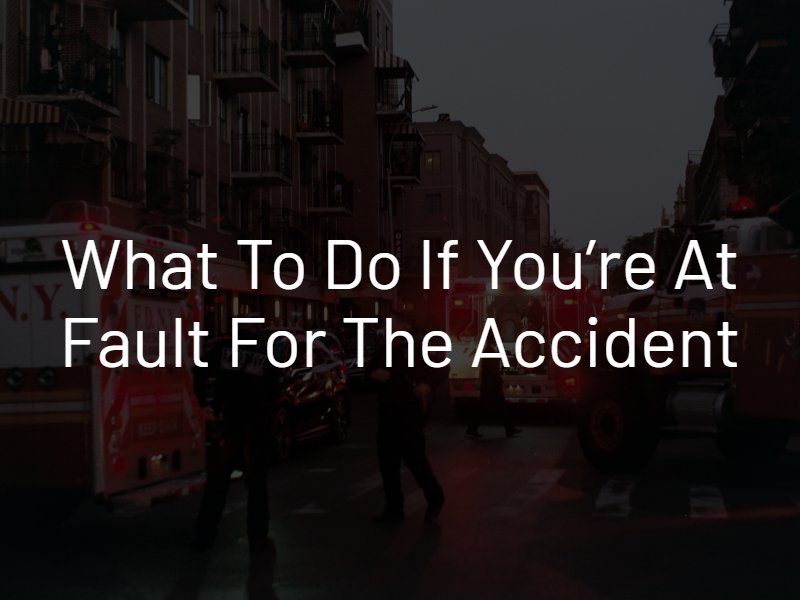 First, remain at the scene to fulfill your legal responsibilities as a driver in a car accident. If you crash into a parked vehicle, another driver, or a bicyclist or pedestrian, you must stop as close to the scene of the crash as possible. Move your vehicle to the side of the road, if you can, and use your hazards to prevent further collisions. Check to see if anyone has any injuries. Call 911 immediately if someone is injured, someone has died or the accident appears to have caused more than $1,000 in property damage. You legally must render aid to injured parties at the scene of a car accident.

Do Not Admit Fault

It is often not immediately apparent how a car accident happened. Many crashes require professional investigations to determine causation and fault. It is important not to admit fault early on in your case. Admitting fault – even if you think you are to blame – can end the case before a thorough investigation. It could unjustly place 100% of the liability with you. You may absorb all of the fault for an accident that the other driver contributed to. Do not admit fault to the other driver, a police officer or an insurance company. Instead, wait for an investigation to identify causation. Other factors or parties you are unaware of could have played a role in the collision.

Learn the Fault Law in Your State

In some states, you will seek compensation from your own car insurance provider regardless of whether you were at fault. These are called no-fault insurance states. Nebraska, however, is an at-fault state. As the driver at fault for the car accident, it will be your insurance company that covers the other driver’s medical bills and property repairs. You will use your own bodily injury liability and property damage liability insurance to pay for the other driver’s damages.

Call your insurance company to report the car accident as soon as possible as the at-fault driver. Again, do not admit fault for the accident. Stick to the facts of the crash as you know them to be true, such as the date, time, location and direction you were traveling. Let the insurance company investigate the crash for signs of the other driver’s shared fault. You may both be at fault for the collision rather than 100% of the liability going to you.

File a Claim – Nebraska Is a Modified Comparative Negligence State

Do not assume you cannot receive compensation from the other driver if you believe you caused or contributed to the car accident. Nebraska is a modified comparative negligence state, meaning you could still recover partial compensation even if you were somewhat to blame for the crash. The insurance company will look at police reports, eyewitness statements, evidence from the scene and other sources to allocate a percentage of fault to you, the other driver and any other involved parties.

If you and the other driver share fault, this could reduce your liability for that driver’s damages. If the other driver was 20% to blame for texting while driving, for example, you would owe him or her 20% less in damages. Even if you are entirely at fault, you may have collision or comprehensive insurance that can help you with the costs of the accident. Your insurance premiums will most likely increase, however, as the party at-fault for the accident. Discuss your car accident case with an attorney in Omaha for more information about fault and the claims process.