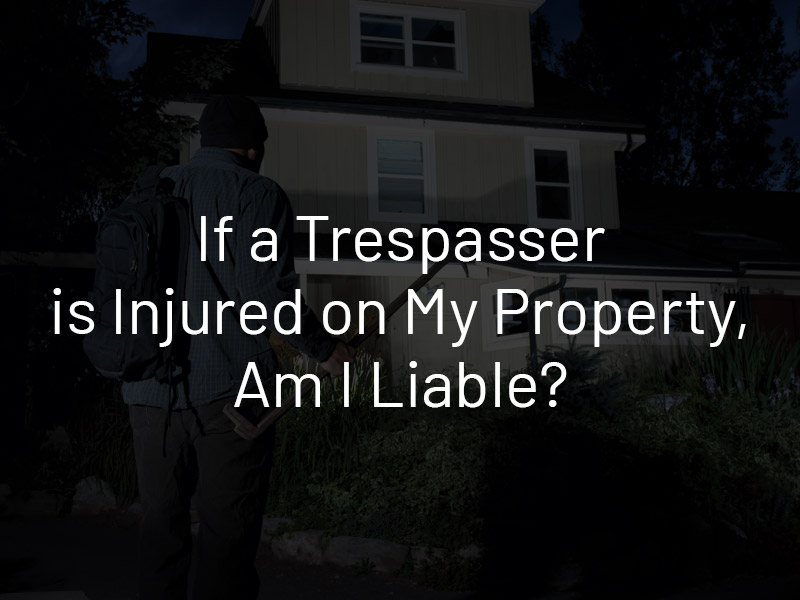 Can a Low-Impact Accident Cause Serious Injuries? 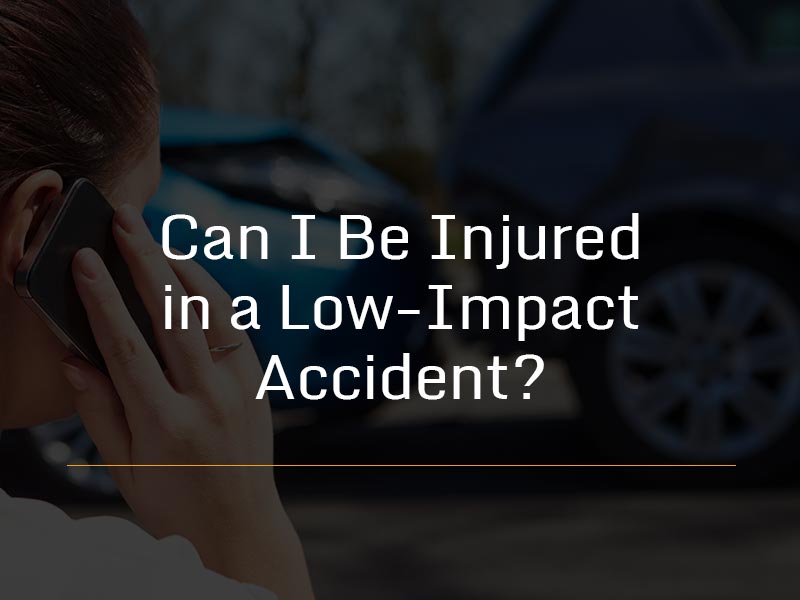 Thousands of car accidents in Nebraska each year are low impact, meaning the vehicle was traveling under 10 miles per hour. The gravitational forces in an accident – even while traveling at a low speed – can still be enough to cause injuries to the vehicle’s occupants. In every car accident, three collisions happen – the vehicular collision, the human collision, and the internal collision. The human collision refers to the occupant’s body connecting with objects inside the vehicle. The internal collision is the organs impacting other organs or the skeletal frame.

A low-impact crash can still impart enough kinetic force into vehicle occupants to cause significant human and internal collisions. The occupants will accelerate faster than the vehicle, leading to them absorbing most of the force of the impact. This can cause injuries such as blunt force trauma, bruises, contusions, concussions, and lacerations. If a low-impact crash is enough to whip the victim’s upper body forward and backward, he or she could also suffer serious neck and back injuries.

The spine is a sensitive part of the body that is prone to serious injuries in auto accidents of all calibers. One of the most common and potentially serious low-impact crash injuries is whiplash. Whiplash is the straining or injuring of the tendons and ligaments of the neck. The soft tissues of the neck often cannot withstand the forces of a low-impact accident. Whiplash generally occurs when the head and neck rapidly move back and forth due to the impact of a collision. Rear-end car accidents most commonly produce impact forces that injure the occupant’s neck.

Do You Need a Lawyer After a Low-Impact Accident?

Car accident attorneys do not only represent victims of serious, high-speed or deadly collisions. They represent victims of crashes of all kinds, including people injured in low-impact collisions. You might need a lawyer’s assistance after a low-speed accident if you suffered a personal injury such as whiplash, a back injury, slipped disk, pulled muscle or torn ligament. These are potentially serious injuries that could cause chronic pain and long-term disabilities. They are the types of injuries that deserve attention from attorneys.

If you had a preexisting injury a low-impact accident worsened, you may need a lawyer’s help for insurance negotiations. Insurance companies often try to deny claims involving preexisting injuries, when in reality the party that caused the accident should be responsible for all your related losses – including the exacerbation of a preexisting condition. Do not let an insurance company convince you that a preexisting injury will negatively affect your claim. Use a lawyer to negotiate a fair and full compensatory award despite preexisting conditions and/or the low impact of the crash. The same rule applies to cases involving vulnerable parties such as children or the elderly.

Another reason to hire an attorney is for proof of injury. An auto insurance company will ask for proof that you sustained the injuries you are claiming to have suffered. Since low-impact accidents can injure the soft tissues, injuries may not appear on imaging scans or x-rays. This can make it more difficult to obtain proof of your injuries to show to an insurance provider. If you hire an attorney, he or she could help you prove your case through means such as medical documents, expert witnesses, testimony from your family members and crash reconstruction. Using a lawyer to navigate your low-impact crash claim could ensure you do not settle for less than your injuries are worth.

My Child Was Injured at School…What Can I Do?

No parent should expect a child to go his or her entire childhood without a single injury. Parents should not, however, have to anticipate the risk of severe or life-threatening injuries – especially while at school. Sadly, not every school in Nebraska takes its responsibilities over student safety seriously. Negligence, carelessness and unsafe premises can cause serious student injuries. If your child suffered an injury at school, learn your rights as a parent. Your family may be eligible for a damage award if the school or a staff member should have prevented the accident. Filing a claim with the help of an Omaha child injury attorney could also shed light on dangerous practices at your child’s school, pushing for a change. 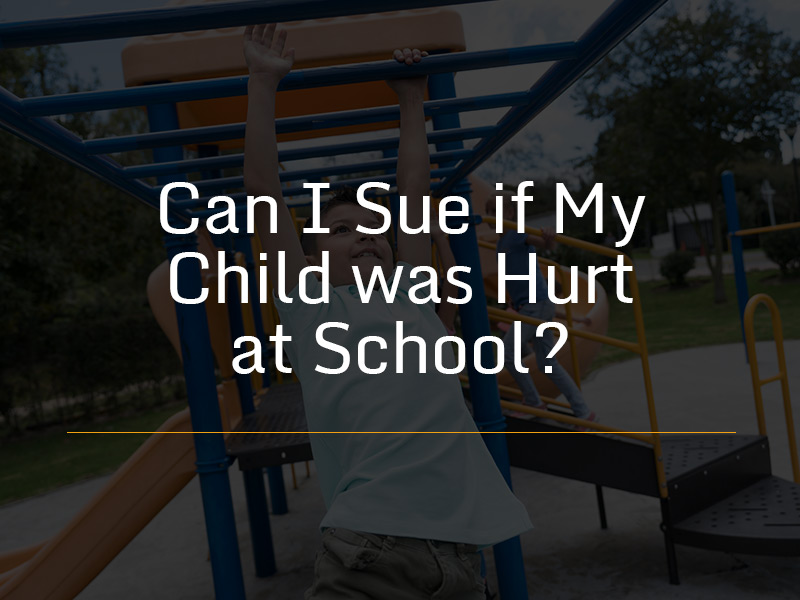 School Injuries That May Lead to Lawsuits

Although it is normal for kids to get the occasional bump or bruise, coming home with a bone fracture or head injury is cause for concern. Schools and their staff members should take reasonable care to prevent serious and unusual child injuries. Failure to do so could yield the opportunity for a student to suffer many different types of serious injuries.

Injuries at school can stem from normal child’s play…or something more sinister. Negligence could have caused your child’s injury if it happened because of dangerous playground equipment, lack of child supervision or crime such as child abuse. The school or school district could be liable in these situations.

Determining a School’s Liability in Omaha

As a parent, you may have grounds to file an injury lawsuit on your child’s behalf against a school in Omaha if it was negligent in preventing the accident. Negligence refers to a breach of duty of care. All schools owe a duty to reasonably prevent student injuries and deaths. This duty of care entails many actions and behaviors schools and their staff members should follow to minimize the risk of student injury. Any breach of this duty could expose the school to liability for a child’s serious injuries or death.

If a prudent school in Omaha would have acted differently under the same circumstances, your child’s school could be liable for your damages. Your injury lawyer will need to prove that the school should reasonably have done more to prevent your child’s injury. Proving negligence may take a full investigation of the accident, along with gathering evidence and speaking to witnesses who saw your child’s incident. A lawyer can help you with this burden of proof.

Is a Public School Immune?

No, public schools in Nebraska are not immune to accident liability. Although the sovereign immunity rule protects most government entities from liability, it does not apply to situations in which the government or one of its agents was negligent in causing or contributing to the accident. If your child’s public school or one of its employees contributed to your child’s injuries, you may use the state’s Tort Claims Act to bring a lawsuit.

If you wish to bring a claim against a public school, you will need to file a claim with all pertinent information regarding your case to the Office of Risk Management in Lincoln, Nebraska. You or your lawyer will need to include the total amount of the claim, place of occurrence, insurance information and relevant known facts regarding the injury claim. If your case is worth more than $5,000, you or your attorney will need to attend a hearing. Hiring a lawyer can help you go up against your child’s school in pursuit of fair financial recovery in Omaha.