What Are the Texting and Driving Laws in Nebraska?

Texting and driving is a major cause of injury and fatal car accidents in the U.S. It is a common source of driver distraction in Nebraska and around the country. In 2017, distracted drivers caused car accidents that took a total of 3,166 lives. The known risks of distracted driving, and especially texting and driving, has led many states to pass laws related to banning cellphone use behind the wheel. Nebraska is one of them. 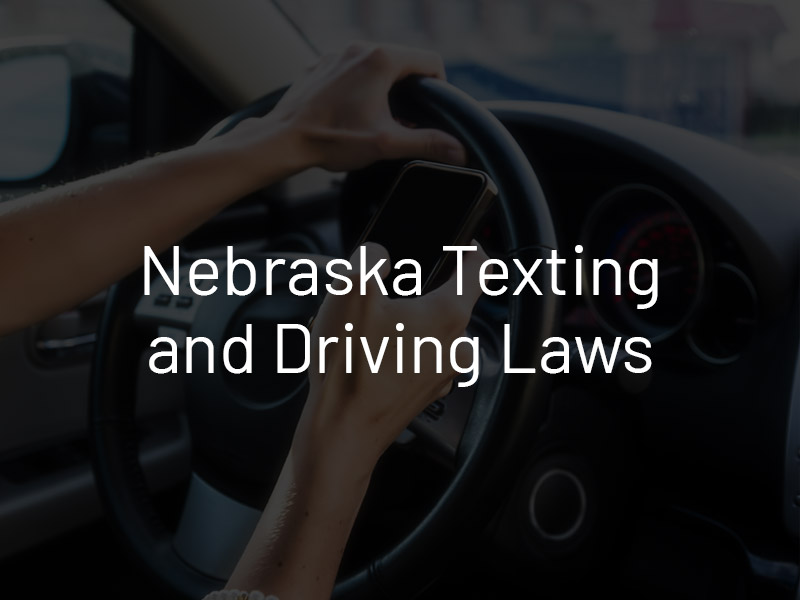 The Risks of Texting and Driving

Texting and driving checks off all three forms of driver distraction: manual, visual and cognitive. Looking down at a cellphone and pressing its buttons can slow reaction times, making it impossible for a driver to stop quickly enough to prevent a collision. Reading messages also distracts a driver mentally, impairing judgment and reflexes. Looking down at a message for five seconds while driving at 55 miles per hour is the equivalent of crossing a football field blindfolded, according to the National Highway Traffic Safety Administration. Texting and driving can be just as dangerous as driving drowsy or impaired.

Texting and Driving Is Illegal in Nebraska

For the purposes of the law, operating a motor vehicle includes any time the vehicle has come to a temporary stop, such as at a stop sign or red light. Parking the vehicle, however, will enable a driver to read or send electronic messages without breaking the law. The fine for breaking Nebraska’s texting and driving law is $200 to $500. Breaking the law will also put three points on a driver’s record. Enough points can result in consequences such as a suspended or revoked driver’s license.

A few important exceptions to the texting and driving rule exist. A driver may text behind the wheel in an emergency situation, for example, or if the driver is a medical professional, police officer or emergency service personnel on official duty. Devices permanently affixed to the motor vehicle, hands-free devices, and voice-operated devices are also exceptions to the rule. All texting violations in Nebraska are secondary, meaning the police need another reason to stop a driver. An officer can only write a texting and driving citation if another violation motivated the stop.

Cellphone Calls Illegal for Some Drivers

Drivers that owe additional responsibilities to public safety, such as commercial vehicle drivers and school bus drivers, have stricter cellphone laws the must obey. In addition to being unable to text and drive, these drivers also may not make phone calls from handheld wireless communication devices. They cannot use handheld devices for any reason while driving, except in emergencies or to input navigation information. Texting and driving is a serious traffic violation for commercial and school bus drivers. Getting two or more such violations can lead to the loss of driving privileges for commercial drivers.

Repercussions for Causing an Accident While Texting and Driving

Causing a car accident while breaking Nebraska’s texting and driving law could lead to civil and criminal penalties. The driver may receive a reckless driving citation or criminal charges for more serious cases. In crashes involving catastrophic injuries or deaths, for example, the distracted driver could face a vehicular manslaughter charge for wanton disregard for the safety of others. The driver would also be civilly liable for all victims’ damages. Civil liability means the driver must pay for all related losses, including medical bills, property repairs, lost wages, and pain and suffering. No driver should ever text and drive, for his or her safety and the safety of others.