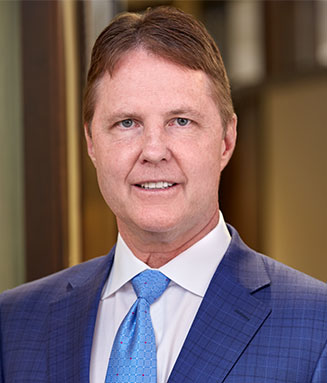 He began working for McGrath, North, O’Malley & Kratz (now McGrath, North, Mullin & Kratz) in 1983 handling primarily corporate, tax and securities matters. In January 1986 he joined his father, Jim Knowles, Sr., at Knowles Law Firm and since then has focused his practice on personal injury cases.

He has tried cases in both state and federal courts and was selected as one of the top 100 litigation lawyers in Nebraska for 2014 by the American Society of Legal Advocates. Less than 1.5 percent of lawyers nationally are selected for this recognition. He is rated AV by Martindale-Hubbell which is the highest rating an attorney can obtain.  He was also selected by Martindale-Hubbell as a 2019 Top Rated Lawyer.

Bob and his wife, Maria, were married in 1983 and have three children. Their oldest, Christina, graduated from Creighton Law School in 2012 and joined Knowles Law Firm in September 2012. Their middle child, Bobby, recently graduated from Creighton Law School and is expected to become a member of the firm this fall. Their youngest, Elaina, graduated from Nursing School at the University of Kansas in 2012 and is employed as a nurse in the Pediatric Intensive Care Unit at Children’s Hospital in Omaha.

Bob is the past president of the Touchdown Club of Nebraska, which at the time was the largest booster organization for the University of Nebraska football. He currently serves on the Board of Director’s for the Nebraska Chapter of the National Football Foundation and College Hall of Fame. He is also heavily involved in the activities of his church.

During his free time, he enjoys spending time with his family and friends, golfing and traveling.