What Is a Right Hook Accident?

Cycling is a popular mode of transportation in Nebraska, but it can also be highly dangerous. Not all drivers respect bicyclists’ rights to the road. Many people drive distracted, drowsy, drunk or otherwise unable to safely control a vehicle. Unsafe drivers can lead to catastrophic and fatal collisions with bicyclists. In 2018, Nebraska recorded 238 bicyclist accidents, with dozens of injuries and no deaths. The right hook is one of the most common accidents impacting cyclists in Omaha. 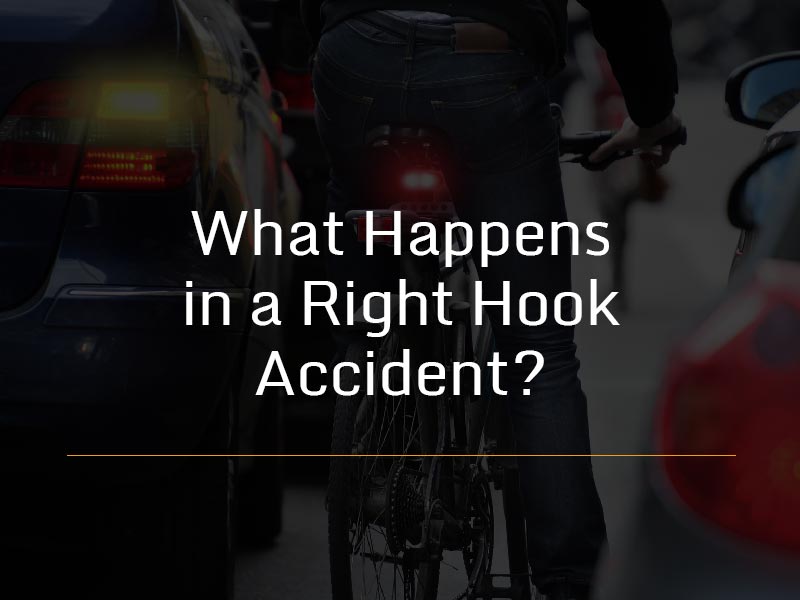 How a Right Hook Can Happen

A right hook accident refers to a motorist striking a bicyclist headed in the same direction by turning right into the bicyclist. The most common circumstance leading to a right hook accident is a motor vehicle driver passing a bicyclist going in the same direction and then making a right turn. This can cause the vehicle to collide with the biker or the bicyclist to crash into the side of the car. Drivers may misjudge the speed of a bicyclist or the distance between the two vehicles. As the vehicle slows to make the turn, however, the bicyclist often has a chance to catch up so the two are at the intersection at the same time. Distracted drivers may not notice they passed a bicyclist at all.

A right hook accident can seriously injure or even kill a bicyclist. A vehicle colliding with a bicycle can mean injuries for the bicyclist such as skull fractures, traumatic brain injuries, broken bones, soft-tissue injuries, back injuries, road rash, cuts and scrapes, and internal organ damage. An injured biker may need weeks or months to recover or could suffer permanent disabilities, on top of medical expenses and bicycle replacement. A right hook accident could easily be fatal for the biker depending on the nature of the collision.

How to Avoid a Right Hook Accident

Both parties often have the power to prevent a right hook accident. A driver should drive prudently around bicyclists and always keep his or her eyes on the road, scanning for bicyclists on all sides of the vehicle. If the motorist is driving to the left of a bicycle riding in the road or a bike lane, the motorist should wait for the bicyclist to safely pass or come to a stop before making a righthand turn. A driver should always use a turn signal in advance, scan the road behind and to the right of the vehicle, and make sure it is clear to turn before making the maneuver. As a general rule, motorists should avoid passing bicyclists at all before turning.

Bicyclists can also help prevent right hook accidents. A biker can ride in the center of the road (when no bike lane is available) to make it more difficult for a vehicle to pass right before making a turn. Bicyclists should not pass vehicles on the right, but instead slow down behind a vehicle that slows down in anticipation of a turn, even if the motorist does not have a turn signal on. If the vehicle does not turn or speed up, the biker should pass it to its left, not its right. A bicyclist can pass to the right, cautiously, only if the vehicle has stopped, and only while watching for opening car doors. Bikers should try to ride behind other vehicles, not in their blind spots to the left or right of the car. A bicyclist should leave room to brake in case the car turns right.

If you’ve been injured in a right hook accident, contact the Omaha pedestrian accident attorney at Knowles Law Firm today!