What Is a Herniated Disc and How Does it Happen?

A spinal cord disc is a round cushion that is positioned between two vertebrae in the spine to improve mobility. Discs are soft and jelly-like on the inside and rubbery on the outside. If a disc gets misplaced (a slipped disc) or ruptures, it can impact how the back feels and functions. A herniated disc is when the exterior of the disc tears and some of the interior pushes out. 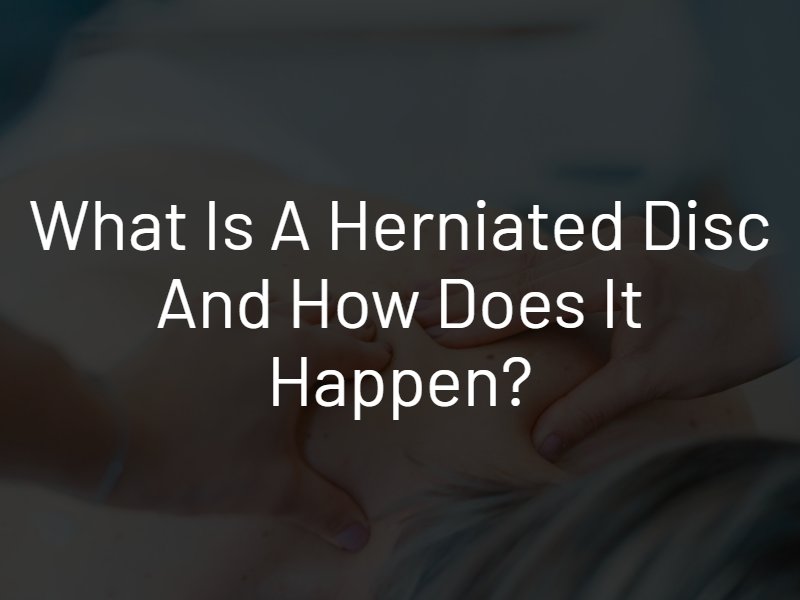 What Is a Herniated Disc? What Are the Symptoms?

The outside of a spinal disc is called the annulus, while the center is called the nucleus. Together, these two elements act as shock absorbers in the spine. A herniated disc (also called a slipped, bulged or ruptured disc) is when part of the nucleus gets pushed out of the annulus through a tear in the tough outer layer.

Disc herniation can cause several symptoms, such as:

The spinal canal does not have enough space for a displaced disc fragment as well as the nerves. Since disc herniation displaces the disc, it often forces it to press on spinal nerves and cause pain. Some victims, however, do not feel any pain. Herniated discs can occur in any part of the spine but are most common in the neck and lower back. Where disc herniation takes place determines where the victim will experience pain.

Disc herniation can occur naturally over time as the spinal cord weakens, or it may be triggered by a traumatic event. As you age, the elements of the spine can become more vulnerable to tears and injuries – especially when twisted or turned the wrong way. This can increase the risk of suffering a herniated disc.

Disc herniation is most common when disc degeneration has begun. Degenerative disc disease can occur as one ages, or else be produced by a traumatic injury. It weakens the ligaments that hold spinal cord discs in place. This can increase the odds of a disc rupturing when a person twists the wrong way or strains his or her back.

What to Do About a Herniated Disc

If you get diagnosed with a herniated disc, follow your doctor’s treatment plan exactly. This plan may include pain-relieving medications, muscle relaxers, physical therapy and surgery. Request copies of all related medical records and bills. If disc herniation takes you out of work, gather copies of pay stubs and a letter from your employer proving that you cannot work.

If you believe disc herniation is related to an accident in Omaha, take all of your evidence and documentation to a personal injury lawyer for a free consultation. You may be eligible for financial compensation if a careless or reckless party caused your spinal cord injury. If so, you could recover the costs of your medical care, lost wages and other financial losses. Discuss your case with a disc herniation lawyer in Omaha today.