If you get into an auto accident, there are important steps you need to take to protect your rights as an injured victim. These steps are often critical for a successful insurance claim, yet most people fail to take them. There are also things you should not do – mistakes frequently made after auto accidents – that could hurt your claim. Avoid these five common examples for the strongest possible claim. 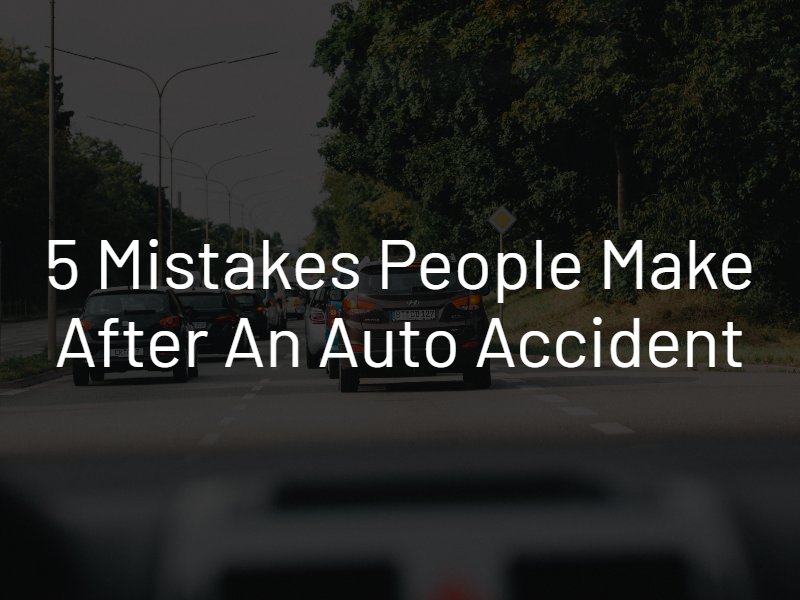 Not Calling the Police

Many crash victims are reluctant to involve the police. They may think they’re going to get tickets for traffic infractions, such as speeding or reckless driving. They may also wish to keep the accident under an insurance company’s radar by not reporting it. Failing to call 911 is a serious mistake, however. Not only is calling the police a legal requirement for a serious accident in Nebraska, but it could also provide an important type of evidence for an insurance claim.

The first thing an auto insurance company asks for when reviewing a claim is the police report number. The insurance company wishes to access the official write-up of the car accident by law enforcement. A police report can contain key information, such as the names of both drivers involved and statements from eyewitnesses. This information can be critical in determining fault and processing an insurance claim. Always call the police, even after a minor car accident, if you wish to have a stronger insurance claim.

It may be in your nature to apologize to the other driver involved in your auto accident. Doing so, however, could hurt your chances of recovering compensation from that driver, as an apology could be construed as an admission of guilt. Saying you’re sorry alludes to the fact that you think you did something wrong, such as something that might have caused the collision. Apologizing to the other driver, to the police or to an insurance agent could be the equivalent of admitting fault. Never say you’re sorry or admit fault for an auto accident. Instead, wait for the insurance company’s investigation to appoint fault.

Never skip the trip to a doctor or hospital after an auto accident in Omaha, even if you feel fine or think you’re uninjured. Hidden or delayed symptoms are a distinct possibility after a car accident, especially with adrenaline masking the pain. It is important to see a doctor after any car crash for an official injury diagnosis. This will serve as key evidence for your insurance claim. If you delay medical care or never see a doctor, the odds of an insurance company accepting your claim fall much lower.

It is common for injured auto accident victims to underestimate their losses. This can lead to accepting less than they deserve from insurance companies. Part of the problem is that insurance companies often intentionally offer inadequate settlements in the hopes that claimants will not recognize the true value of their claims. You cannot renegotiate a settlement once accepted. This is why it is extremely important to ensure the fair value of a settlement offer before signing an agreement.

Contacting an auto accident attorney in Omaha is the best way to find out how much your case is really worth. An attorney can also help you in other ways, such as negotiating with an insurance company on your behalf and setting you up with the best doctors in your area. Handling a claim pro se, or without an attorney, is a common mistake that can lead to accepting a too-low settlement. Learn more about what to do and what not to do after an auto accident by contacting a lawyer near you today.