Who Is Liable for a Self-Driving Vehicle Accident?

Self-driving vehicles are not a new concept, but they are a relatively new reality. The technology is not yet perfect, with glitches and malfunctions that have cost lives. The first recorded death involving a self-driving car occurred in Tempe, Arizona in 2018, when the driverless technology failed to detect a crossing pedestrian. The vehicle struck and killed the pedestrian when she tried to cross the street. When a driverless vehicle gets into an accident, the question of liability can be a difficult one to answer. Fault may come down to the vehicle manufacturer, the human behind the wheel or many other parties. 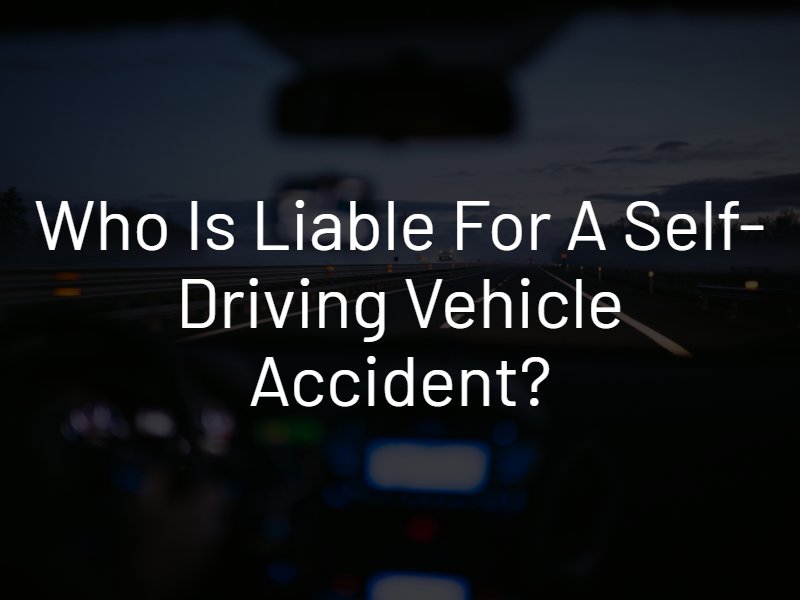 The manufacturer of the self-driving vehicle has a legal responsibility to ensure the product’s reasonable safety. While this does not mean guaranteeing zero accidents, it does mean taking steps a reasonable and prudent manufacturer would take in the same situation to prevent collisions. This could include properly testing the self-driving software technology and conducting crash tests before releasing the vehicle to the public. It could also mean repairing any known defects or issues with the technology in a timely manner.

If the designer, manufacturer or distributor of the driverless vehicle released a defective product, it could be strictly liable for crash victims’ damages. Strict product liability means the victim of a collision does not have the burden to prove the defendant’s fault. The manufacturer would be legally responsible even if it was not negligent during the design or creation of the defective vehicle. The plaintiff in a strict product liability claim would only have to show that the self-driving vehicle contained a defect and that it caused the accident.

If it was the self-driving software that glitched and caused the accident specifically, the software company could be liable for the crash instead of the car’s manufacturer (if they are two separate companies). Self-driving software defects have been behind multiple deaths involving driverless vehicles in recent years, as well as many injuries. In most of these crash cases, the driverless software did not perform as expected to detect oncoming vehicles, bicyclists or pedestrians and properly apply the vehicle’s brakes. In these situations, the software designer could be legally at fault for crash victims’ damages.

A driverless vehicle accident could trace back to the fault of its human supervisor. Most self-driving vehicles are not entirely self-driving – they carry drivers that still have the responsibility to supervise the autonomous technology and intervene to avoid an accident, if necessary. If the vehicle makes a tone warning the driver to take over, for example, the human supervisor should step in to take control of the car until the hazard or issue has passed. Failure to properly supervise the technology and react could point to fault on the vehicle’s occupant.

Although self-driving technology is advanced, manufacturers have not perfected it enough to take over for humans entirely. It is still up to vehicle occupants to pay attention, obey the vehicle’s warnings and immediately react to changing roadway conditions. If the driver behind the wheel of an autonomous car or truck was texting, watching videos, chatting, eating, or otherwise too distracted or negligent to promptly react to hazards, the driver could absorb liability for a resultant collision.

Some self-driving vehicle accidents have nothing to do with the self-driving vehicle or its human occupants. Third-party drivers can make mistakes and crash into driverless cars as they would other vehicles. In these situations, the third-party driver could be responsible for paying for damages. Victims in these accidents would seek restitution from the at-fault party’s insurance provider as they would after any other type of car crash in Nebraska.

How a Lawyer Can Help

Liability for your self-driving vehicle accident will depend on its cause and the factors at play. It can be a complicated matter that requires a full investigation. The vehicle manufacturer, software company, human supervisor, another driver or many other parties could owe you compensation for your damages after a self-driving car accident in Nebraska. Work with an Orange County car accident attorney near you to investigate your recent auto accident and determine fault. A lawyer will understand the unique laws surrounding self-driving vehicles, as well as how to navigate an accident claim. A lawyer can also help you fight for full damage recovery.