What Are the Long-Term Effects of a Concussion?

The head and brain are vulnerable parts of the body that can sustain serious injuries in many types of accidents, including motor vehicle collisions and falls. A traumatic brain injury such as a concussion arises when a blow to the head damages the tissues and cells of the brain, causing serious symptoms. Concussions are the most common type of brain injury. In the most severe circumstances, a concussion can cause catastrophic and long-term health effects. 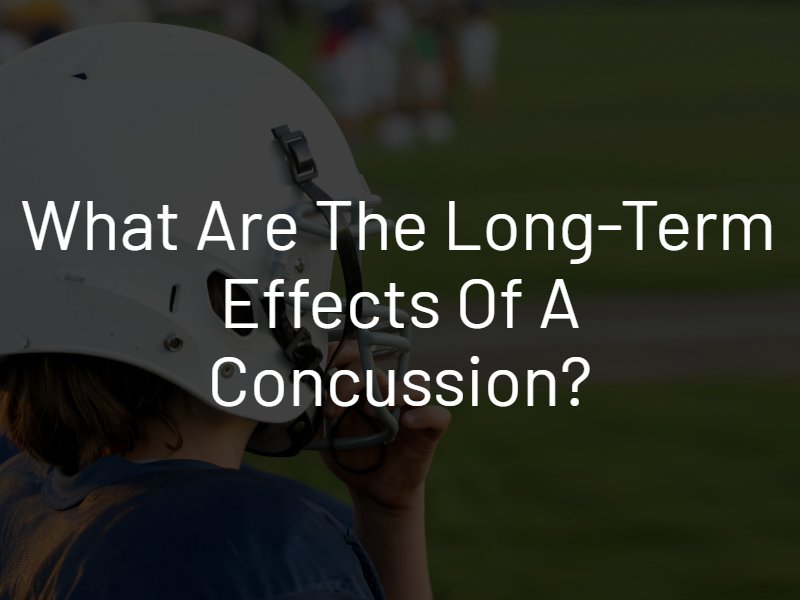 What Is a Concussion?

A concussion is a type of traumatic brain injury that specifically comes from the brain moving rapidly back and forth inside of the skull after a bump, jolt or blow to the head or body. The bouncing or jolting motion can cause the brain to strike the inside of the skull with enough force to damage and even kill the brain cells. This damage can lead to a variety of temporary or permanent symptoms associated with a concussion. It can also cause other types of brain injuries, such as swelling (edema) or bleeding (hemorrhage).

Common Symptoms of a Concussion

Doctors classify concussions as mild, moderate or severe. Even a mild concussion, however, can have effects and symptoms that drastically impact a victim’s life. There is no such thing as a minor or trivial brain injury. Any level of damage to the brain can be physically and emotionally devastating. Although each brain injury is unique, some of the most common symptoms associated with concussions include:

The symptoms of a traumatic brain injury can arise immediately after a blow to the head. In some cases, however, symptoms can be delayed or remain hidden for hours or even days after the incident. For this reason, it is critical to get medical care immediately after an accident if you hit your head – even if you feel fine. A doctor can use special tests such as CT scans to diagnose you with a concussion even before you notice symptoms. Prompt medical care is critical.

Some concussions are serious enough to cause lasting damage. Severe brain injuries can alter the chemicals in the brain, damaging the cells enough to permanently destroy them. This can lead to long-term physical, psychological and cognitive effects, such as:

Studies have also shown that concussions can increase the risk of age-associated brain disorders, such as Alzheimer’s and dementia. It is also linked to chronic traumatic encephalopathy (CTE) – a brain disease that can only be diagnosed postmortem. CTE is most common after repeated impacts to the head. It can cause symptoms that alter the way the individual thinks, feels, behaves and moves.

Lifetime Costs of a Severe Concussion

If an accident victim suffers a severe concussion with long-term effects, the related costs can be immense. According to the Centers for Disease Control and Prevention, the estimated lifetime economic cost of traumatic brain injuries in the U.S. is $93 billion annually. This includes direct and indirect medical costs. In addition to medical costs, a victim can suffer a lifetime of lost or diminished wages and employment benefits.

If you or a loved one suffers a severe concussion, you may be eligible for financial compensation from the party that caused the injury. Nebraska’s personal injury laws allow injured victims to seek financial damages from the at-fault party – usually by bringing a claim with that party’s insurance provider. Filing a personal injury lawsuit may enable your family to pay for the long-term costs associated with a serious brain injury. Consult with a concussion attorney in Omaha today for more information about your rights.