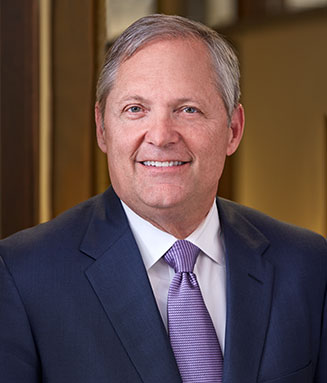 Jim joined his father, Jim Knowles, Sr., in 1981 and has worked at Knowles Law Firm since. He initially worked on personal injury and insurance defense matters but for the past 20 plus years has represented only personal injury victims.

Jim has tried cases in all the Nebraska trial courts, including county, district and workers’ compensation. He has successfully argued appeals in the Nebraska Court of Appeals and the Nebraska Supreme Court. He has also been a presenter at seminars sponsored by the Nebraska Association of Trial Attorneys.

Jim is married to Rjean Knowles whom he met while they were both students at Creighton Law School. Rjean practiced law for several years before retiring to raise the couple’s three children. Two of those children, Matthew and Benjamin, are currently practicing attorneys at Knowles Law Firm. The couple’s daughter, Stacey, is a sales representative for the McKesson Corporation, an international distributor of pharmaceuticals and health care products.

Apart from the practice of law, Jim is involved in the breeding and racing of thoroughbred racehorses. He and his wife own a farm in Lexington, Kentucky.