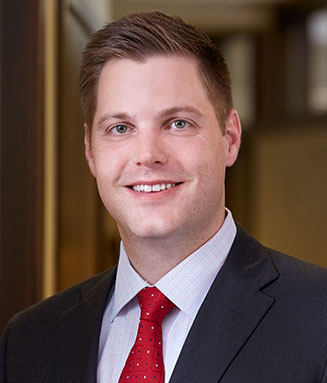 Ben Knowles was born in 1986 in Omaha, Nebraska. He attended grade school at St. Wenceslaus and graduated in 2004 from Creighton Prep High School. He attended college at Creighton University where he graduated in 2008 with a Bachelor of Science Degree in Business Administration in accounting. Thereafter, he attended Creighton Law School, where he earned his Juris Doctorate in the spring of 2011. Ben joined Knowles Law Firm in the Fall of 2011 after passing the Nebraska state bar exam.

Since joining Knowles Law Firm, Ben’s practice has been dedicated to helping accident victims.  The majority of his cases involve persons injured or killed in auto accidents.  These auto accident cases range from a very routine rear-end whiplash case to catastrophic injury cases involving trucks and buses.  The most difficult cases Ben handles are wrongful death claims, where he represents families who have lost a spouse or child in an accident.

Ben and his wife, Kate, met while in high school and married in 2011. They have three boys:  Jack, Harris, and Teddy.

Apart from the practice of law, Ben enjoys spending time with his wife and three boys.  His hobbies include golfing, basketball, cheering on the Creighton Bluejays and Nebraska Cornhuskers.